Given the wide range of positions and professions at DAF and the fact that the company started out as a family business, it is no wonder that many members of the same families are employed at our organisation. The brothers Stefan and Robert Janssen may work for different departments, but they do share a common passion: working at DAF.

Stefan is the younger of the two but has been working longer at DAF. After finishing his internship at the Product Development department, he was immediately offered a position as a Production Engineer. “Since then I have worked in many different roles and seen many places in the organisation. I recently took up the position of Area Manager in the engine factory.” Robert joined DAF at a later stage and has been working for a few years now as a Test Engineer. When Robert spotted a position that suited his experience and interests, his first thought was to consult his brother, Stefan. “Given my background I knew that I would end up in a different department than Stefan. Nevertheless, it is nice to have someone who has some background knowledge about the company. It’s easier to get more information, for example, the kind of profile you might need to fit.” Stefan goes on: “Robert knows that I love my job, but working there also means I can tell him what it’s like on the inside in the organisation.”

An informal working atmosphere, with a lot of opportunities
“The thing I like most about working at DAF is that the lines and feedback loops at Product Development are very short. I believe that this is unique in the Netherlands in my profession,” says Robert. “And it is all done in a very informal and friendly atmosphere. There are also a lot of opportunities within the organisation.” Stefan agrees: “If you want to achieve something at DAF, there is always a way of getting it done. You have to work at it yourself, of course, but in the end we always find a way to get things done. Sometimes the firm demands a lot from you, but there is plenty the company does in return, too. And that is very much appreciated.”

Mutual appreciation
In addition to a mutual appreciation for each other‘s work, Robert and Stefan also have a strong appreciation of each other at a personal level. They have a close relationship and speak to each other almost every day. “Robert is a real tech person. He knows the details. He can really immerse and even lose himself in a job or topic,” says Stefan. “But he is always there to help others, too. For example, he did a lot of work at the construction site of my house.” “I’m happy I was able to lend a hand!” Robert adds, laughing. “One of Stefan’s greatest qualities is his ability to listen to others. He knows exactly what the organisation wants and recently took the time to spend a few days on the production line to see for himself exactly what it is his people do every day. It’s great to see that kind of commitment,” Robert says. 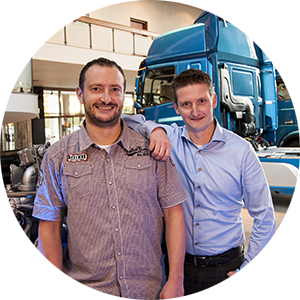