PACCAR declared cash dividends of $1.86 per share during 2014, including a special dividend of $1.00 per share. Total dividends per share declared in 2014 increased by nine percent compared to 2013. PACCAR has paid a dividend every year since 1941. PACCAR’s total shareholder return was 18.2 percent during 2014. In the past ten years, PACCAR’s annual shareholder return has averaged 9.9 percent, compared to the S&P 500 Index annual return of 7.7 percent. PACCAR’s shareholder return has exceeded the S&P 500 Index return for the previous one-, five-, ten- and twenty-year periods.

Highlights of PACCAR’s financial results during the fourth quarter of 2014 include:

Highlights of PACCAR’s financial results during 2014 include:

“Class 8 truck industry retail sales in the U.S. and Canada were 250,000 units in 2014, compared to the 212,000 vehicles sold in 2013,” said Dan Sobic, PACCAR executive vice president. “Truck demand is being driven by the improving economy and fleet expansion. In 2014, PACCAR achieved a Class 8 retail market share in the U.S. and Canada of 27.9 percent as customers benefited from Kenworth and Peterbilt vehicles’ excellent fuel efficiency and outstanding vehicle performance. Estimates for U.S. and Canada Class 8 truck industry retail sales in 2015 are in the range of 250,000-280,000 units, driven by further expansion of truck industry fleet capacity and economic growth,” added Sobic.

DAF is a leader in the European tractor market and is the overall market share leader in the U.K., the Netherlands and Hungary. “Our customers recognize DAF’s quality leadership, low operating costs and superior driver comfort,” said Harrie Schippers, DAF president. “Industry sales above 16-tonnes in Europe were 227,000 units in 2014 and DAF’s market share was 13.8 percent. It is estimated that European truck industry sales in the above 16-tonne market in 2015 will be in a range of 200,000-240,000 vehicles.”

DAF continues to review and prepare a response to the Statement of Objections issued by the European Commission in November 2014. The Statement expressed its preliminary view that all major European medium- and heavy-duty truck manufacturers had participated in anticompetitive practices in the European Union. The Commission indicated that it will seek to impose significant fines on the manufacturers. The Commission will review the manufacturers’ responses before issuing a decision. Any decision would be subject to appeal. The Company is unable to predict the outcome of this proceeding or to estimate the potential fine at this time.

Heavy-duty truck industry sales for South America in 2014 were 129,000 trucks. Heavy-duty truck industry sales in 2015 are estimated to be in a range of 110,000-130,000 units. “PACCAR delivered 3,600 vehicles in South America in 2014, a 37 percent increase compared to 2013. The production of DAF trucks in Brasil and the continued growth of the DAF Brasil dealer network will further enhance PACCAR’s vehicle sales in South America,” said Sam Means, PACCAR vice president.

Kenworth produced its one millionth truck at its Chillicothe, Ohio, assembly facility in November. The truck was an aerodynamic Kenworth T680 Advantage powered by a PACCAR MX-13 engine. Kenworth employees celebrated the vehicle presentation to TransAm Trucking of Olathe, Kansas. “The production and delivery of our one millionth truck highlights another outstanding year for Kenworth. Everyone on the Kenworth team, since the company was founded in 1923, contributed to this milestone,” said Preston Feight, Kenworth general manager and PACCAR vice president.

PACCAR is an environmental leader with its energy-efficient vehicles and manufacturing facilities. Kenworth, Peterbilt and DAF invest in industry-leading products and services to enable our customers to enhance the performance of their businesses. DAF was honored as “Manufacturer of the Year” by the U.K.’s GreenFleet magazine in 2014. DAF won the award for its exceptional Euro 6 design including the innovative Driver Performance Assistant. The GreenFleet Awards are held annually to recognize individuals and organizations who create innovative solutions to reduce the environmental impact of fleet transportation.

“PACCAR’s aftermarket parts business achieved record annual revenues of $3.08 billion and pretax profit of $496.7 million in 2014,” said David Danforth, PACCAR Parts general manager and PACCAR vice president. “The growth in PACCAR’s aftermarket parts business has been driven by investments in distribution, technology and products. PACCAR Parts’ global TRP brand, targeted at all makes and models of trucks, trailers and buses, has contributed to increased parts business at our dealerships. Improving fleet utilization and the age of the North American truck fleet are also contributing to excellent parts and service business.”

“PACCAR has installed over 75,000 PACCAR MX-13 engines in Kenworth and Peterbilt trucks in North America since the start of engine production in mid-2010,” said Craig Brewster, PACCAR vice president. “In the fourth quarter of 2014, the PACCAR MX-13 engine was installed in 37 percent of Kenworth and Peterbilt heavy-duty trucks.” Ron Borsboom, DAF director of engineering, added, “The PACCAR MX-11 engine, with an output of up to 440 hp and torque of 1,550 lb-ft., has been well-received by DAF customers, who appreciate the engine’s light weight, quietness, excellent fuel efficiency and reliability.”

PACCAR’s excellent long-term profits, strong balance sheet, and intense focus on quality, technology and productivity have enabled the company to invest $5.8 billion in world-class facilities, innovative products and new technologies during the past decade. “In 2014, capital of $223.1 million and R&D expenses of $215.6 million were invested in new products and increased manufacturing capacity,” said George West, PACCAR vice president. In 2015, capital expenditures of $300-$350 million are targeted for enhanced powertrain development and increased operating efficiency of company factories and distribution centers. Research and development expenses are estimated at $220-$260 million in 2015.

PACCAR Financial Services (PFS) has a portfolio of 166,000 trucks and trailers, with total assets of $11.92 billion. PacLease, a major full-service truck leasing company in North America and Europe with a fleet of over 38,000 vehicles, is included in this segment. “PFS profit increased due to higher asset balances and excellent portfolio performance in 2014,” said Bob Bengston, PACCAR senior vice president. PFS achieved fourth quarter 2014 pretax income of $96.3 million compared to $90.4 million earned in the fourth quarter of 2013. Fourth quarter 2014 revenues were $302.0 million compared to $299.5 million in the same quarter of 2013. For the full year, Financial Services pretax income was a record $370.4 million, an increase of nine percent compared to $340.2 million in 2013. Full year revenues were $1.20 billion compared to $1.17 billion for the same period a year ago. “PACCAR’s excellent balance sheet, complemented by its A+/A1 credit ratings, enables PFS to offer competitive retail financing to Kenworth, Peterbilt and DAF dealers and customers in 22 countries on four continents,” said Todd Hubbard, PACCAR Financial Corp. president. PACCAR Financial Services has excellent access to the debt markets, issuing $1.58 billion in three-, four- and five-year term notes during 2014.
PACCAR is a global technology leader in the design, manufacture and customer support of high-quality light-, medium- and heavy-duty trucks under the Kenworth, Peterbilt and DAF nameplates. PACCAR also designs and manufactures advanced diesel engines, provides financial services and information technology, and distributes truck parts related to its principal business.

PACCAR will hold a conference call with securities analysts to discuss fourth quarter earnings on January 30, 2015, at 9:00 a.m. Pacific time. Interested parties may listen to the call by selecting “Q4 Webcast” at PACCAR’s homepage. The Webcast will be available on a recorded basis through February 6, 2015. PACCAR shares are traded on the Nasdaq Global Select Market, symbol PCAR. Its homepage is www.paccar.com. 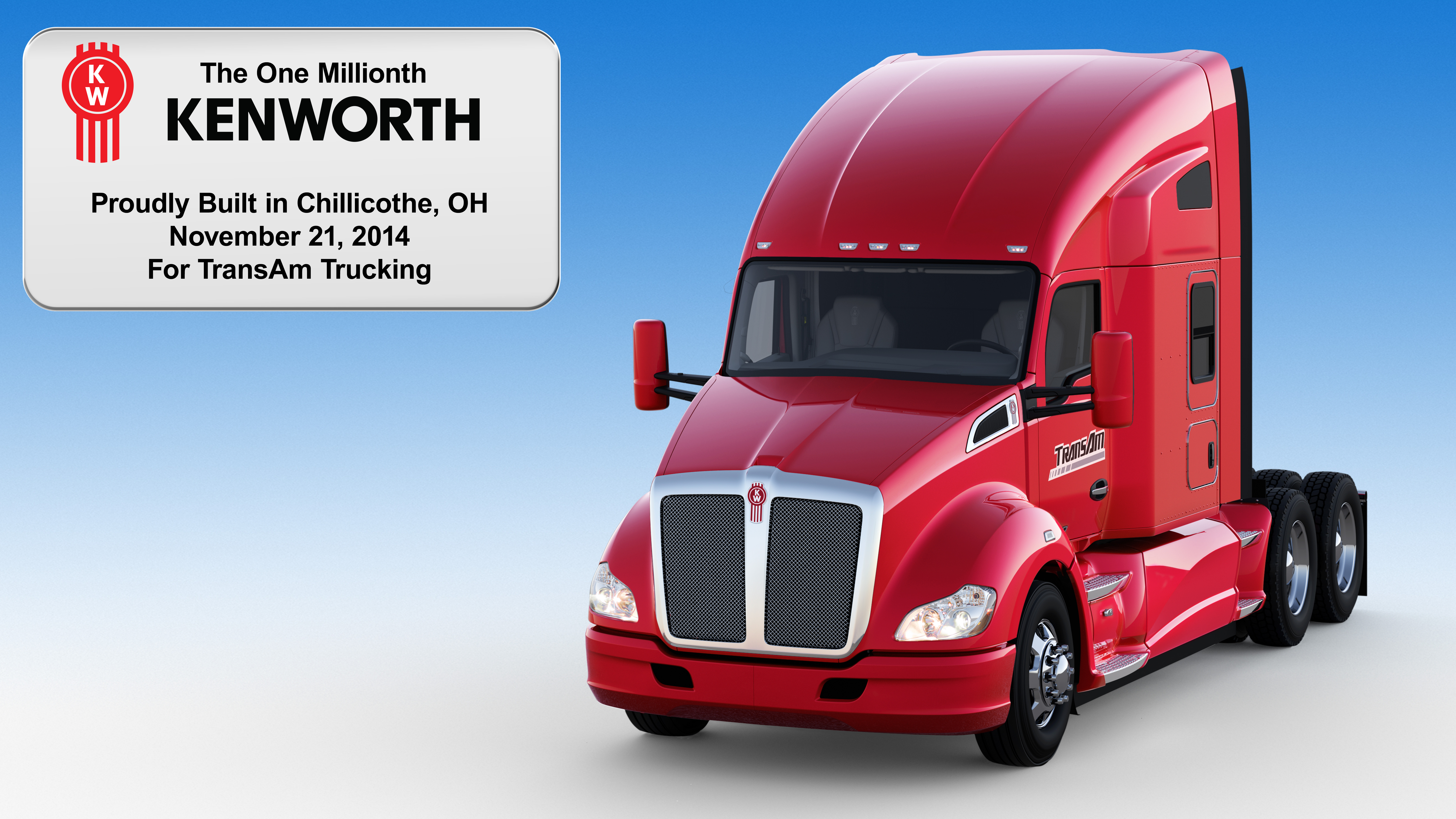